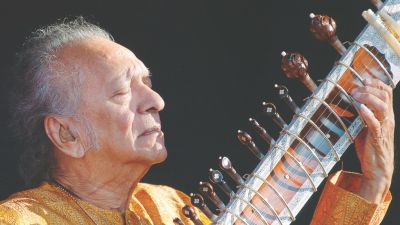 One can never say enough about this maestro, this legend of Indian classical music.

An ace student of Ustad Baba Allauddin Khan of Brahmanbaria (Bangladesh), Pandit Ji belonged to the Maihar Gharana — the “house of music” which his formidable Guru created in the early part of the 20th century after the latter settled down in the town of Maihar in central India. Baba Allauddin Khan groomed young Ravi Shankar like his own son and passed on all the treasures and secrets of his Gharana to his student with an open heart and hand. The receiver needless to say, proved to be a worthy recipient — worthy of his guru, worthy of the sitar and worthy of the art.

Pandit Ravi Shankar presented the sitar along with Ustad Alla Rakha on the tabla at the Woodstock and Monterey music festivals in the USA in late ’60s and took his listeners in USA and subsequently in Europe and rest of the world by a storm. There was no looking back from there.

In many ways Pandit Ji launched Indian classical music at the world stage and showed the world, indeed many in India as well, its sheer power. He re-wrote the rules of Indian classical performances and took it beyond its traditional and limited boundaries.

By all standards, he was a global citizen.

I have heard Pandit Ravi Shankar perform live on five occasions, the last time at the Netaji Indoor Stadium in Kolkata in 2008 when he performed with his daughter Anoushka. I had secured premium tickets and dragged my reluctant five-year-old daughter through the maddening crowds to listen to Pandit Ji, telling her that she will probably hear Pandit Ravi Shankar live for the first and the last time that evening. That was indeed the case. He was 88 then.

Pandit Ji was a humanist. He loved his students and he had a deep sense of concern for the oppressed and deprived. He, along with Ustad Alla Rakha, performed at the Concert for Bangladesh in Madison Square Garden, New York City in 1971 and was one of the key movers, along with George Harrison, of this landmark concert.

He was a guru par excellence in the true Guru-Shishya Parampara (the Indian system of teaching and learning, while living with and serving the teacher). He taught scores of students, without any fee. Many of his students would live and have their meals in his house for months, learning from him without any payment. And Pandit Ji imparted his art to his students liberally, for he was keen to secure the future of Indian classical music.

Pandit Ji was certainly a sadhak (a spiritual seeker) in the true Indian classical tradition in which his art became a means of opening the gateways to anandam (bliss) — to a higher level of consciousness for himself and for his listeners.

I have often wondered, what set Pandit Ji apart from a few other artistes of his generation who were equally gifted, who had equally formidable gurus and whose trainings were as much rigorous. Ustad Vilayat Khan for example had a command on the sitar as no other artiste had. His treatment of the raga was unique and would often have its surprise elements, making the listener gasp in wonder and delight. He was a genius. But then Ustad Vilayat Khan was, in my view, largely a connoisseur’s musician.

Pandit Ji on the other hand was truly multi-faceted.

He was an outstanding composer. One has to watch Satyajit Ray’s “Pather Pahcnali” to get the sense of the heart-wrenching melodies that he could extract from the strings of the sitar. One has to watch Richard Attenborough’s “Gandhi” to get the sense of the immense dynamism and intensity Pandit Ji could bring out of this instrument. Not many in India are aware that he set Mohammed Iqbal’s “Saare Jahaan Se Accha” to music.

Pandit Ji was also performer par excellence for he took his otherwise esoteric music to the masses across the globe, or one could say brought the masses to his sitar. Everyone loved Pandit Ji’s music — connoisseur and layman alike. He was among the first to create a meeting ground between Indian and Western classical music by collaborating with many great artistes from the west.

Pandit Ji was an artiste of exceptional capability. At times he would send his listeners into raptures, into a state of frenzy, at other times he would offer a seemingly endless cascade of melodies. Yet at other times the heavens would open up and he would sweep his listeners to the realm of the gods making them forget about their material existence — he wrenched such intense bhava (emotions) from his instrument.

I am blessed, for I have personally experienced all these.

Thank you Pandit Ji. May you rest in eternal peace…