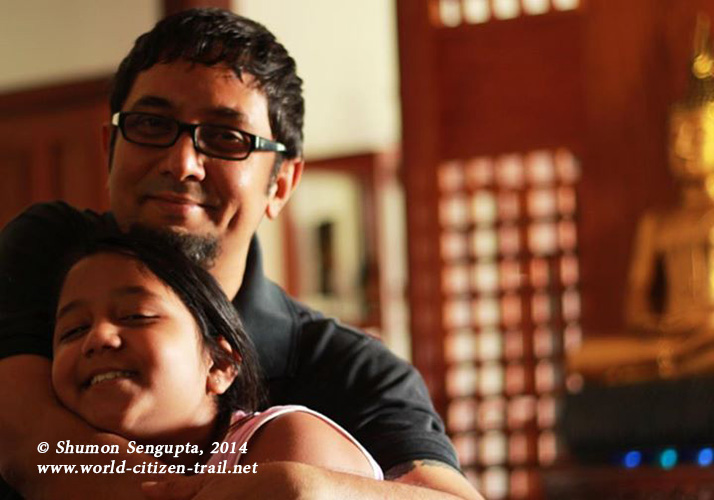 My daughter Minnie is around eight years old when I set myself to the task of introducing her to some serious music – to be precise, Indian Classical Music, Western Classical Music, Ghazals (the songs in Urdu and Persian of love, mostly unrequited) and of course Rabindra Sangeet, the musical compositions of Tagore.

Our wooden Lao style house in Vientiane has fantastic acoustics. Amidst lush greenery and a tropical garden, the sights, sounds and smells of nature combine with the acoustics to present the ideal environment to develop one’s ear and the soul for music.

I proceed with missionary zeal on my new found parental occupation. So early in the mornings even before Minnie is up, often it is either Rashid Khan, M.S Subbulakshmi, Kesarbai Kerkar, Ravi Shankar, Vilayat or Bismillah Khan, in the evenings it is either Suchitra Mitra, Mita Haque, Farida Khanum or Begum Akhtar and late in the night, it is either Bach, Vivaldi, Mozart or Beethoven, to name a random few from my vast collection. Of course the order changes from time to time.

Even at that early age, Minnie has a wonderful pitch perfect voice and a precociously sharp ear for music – a talent inherited largely from her Mother. I have a sense Minnie is already beginning to recognize the notes of Raga Bhairavi or the fourth movement of Beethoven’s 9th Symphony and is picking up the melodies of quite a few songs of Tagore.

Like all other Bengali fathers prone to exaggerated notions about their daughters’ talents and grandiose visions of the bright future that awaits them, I visualize Minnie as the 21st century Kesarbai – the formidable and legendary Indian singer of the 20th century.

All is well and the evenings have a fairly standard routine dedicated to music, followed by book reading, projects, games, some TV or computer time and again more music. However, one evening the routine is interrupted and before I can turn on the music system, Minnie walks up to me and tells me that she is going to work on the computer. I put the CD back into the rack and pick up a book instead.

About half an hour goes by and I am curious to know what she is doing on the computer – whether she is watching the delightful DVD of Dr. Seuss’s “Cat in the Hat” that I have recently got for her. She has the ear phones on and I tap on her shoulders to ask what she is watching.

Without looking at my direction she says rather flatly, “Jay-bee”.

I get the message – she is not to be disturbed and I am expected to back off. But then curiosity gets the better of me and I ask rather cautiously “Now Shona (dear) what is “Jaybee”?

She pauses, takes off her ear phones, looks at me obliquely and says – “O-em-jee “! Giving me a quizzical look she exclaims “Duh ! You don’t know who Jay-bee is Dad”?

I don’t, I confess, realizing that Jaybee is a ‘who’ and not a ‘what’. But Oemjee? What on earth is that supposed to mean? I begin to wonder even before I can figure out who Jaybee is.

I was hearing the name for the first time and I realize that it is a sacrilege of sorts, not to know who Justin Bieber is. “Step aside Beethoven, Mozart, Vilayat, Kesar, Suchitra, Farida et al … Justin has arrived” I tell myself.

“And pray who or what is Oemjee?” I then venture to ask.

“O-em-jee” ! she lets out that funny sound yet again, this time to herself, shaking her head in a rather exaggerated theatrical gesture.

She pushes back her chair, turns to me, faces me squarely and fixes me with a look that is a combination of surprise, frustration, resignation and hopelessness, with a tinge of pity and a dash of contempt thrown in. “Seriously Dad, now you don’t know what O-em-jee stands for”?

Once again I eat the humble pie and confess I don’t.

“O – M – G” she says, emphasizing each letter separately this time “stands for Oh My God! I think I will have to teach you English now!”

Grinning, I say “That would be wonderful Shona. I would love to once again learn English and this time from you”. She gives me a bright smile, a rather hurried hug and gets back to the computer.

Gazing at my eight year old daughter that evening I realize the full import of the term ‘Generation Gap’. Oh my god was simply Oh my god for us. As kids we never used abbreviations to communicate phrases or sentences. But then that is a bygone era, I quickly tell myself.

I remind myself it is has been 44 years already and the world is steadily but slowly and surely passing by. I smile to myself and say…