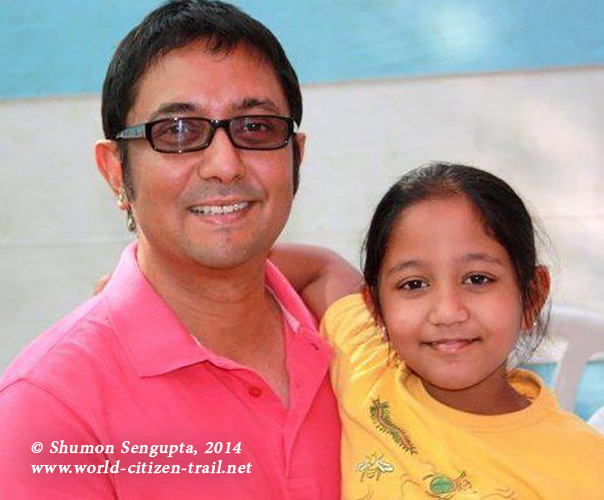 In grade II when my daughter Minnie (Madhura) was barely six years old, her class teacher introduced Poetry to the class, starting with the basic appreciation of the concept of Rhyme as an important feature of a poem. Being in the International Baccalaureate system, Minnie and friends were encouraged to explore the concept through a ‘learner led creative writing exercise’, whatever that meant.

The class teacher of course did not leave the young learners entirely to their own devices. To facilitate the process, they were given a set of pointers to ideate on:

Now that’s generally the age when a girl is completely besotted with her Dad, particularly if the latter was an incorrigibly doting and obsessively hands-on one. So on being asked by her teacher what she wanted her poem to be on, my six year old promptly and proudly declares – “My Dad !”.

That evening after coming home Minnie makes the announcement – that she is going to write a poem on her Dad and not without the added clarification that she is going to work on it entirely on her own, she is not to be disturbed and that she wants the poem to be a surprise. Now, every ‘doting-dad-of-delightful-daughter’ of this world will tell you that nothing else in life can be as flattering, rewarding and fulfilling (read ego-boosting) as his six year old daughter writing a poem on him. I was no exception.

I wait in restless anticipation for the poem, which I am told will be ready by the weekend, in time for submission at the beginning of the following week. Truth to tell, more than wanting to gauge my daughter’s potential as a future poet laureate, I want to hear her recite all the wonderful things she is to include in her poem. That surely is going to be my moment of glory, the proudest moment of my life.

On Saturday evening, Minnie announces that her poem is done and she is prepared and eager to recite it to me. And there I am, eager and jumpy as an excited puppy, all ready to hear with bated breath the most delightful things that would probably be ever said about me, that too by the most important person in my life!

I am very sure that her Ode to her Dad would come with a liberal sprinkling of words such as “Hero”, “Best”, “Great”, “Awesome”, “Cool” etc.

Minnie clears her throat, straightens up and begins her recitation (not without a tinge of pride):

Hey Dad !
I love you Dad
But you are bad
And you make me mad
So I am sad
But I love you Dad
So don’t be sad.
And don’t be mad.
I am glad you are my Dad

She looks up from her paper, starry eyed and gives me a bright expecting smile…and there I am – the big bloated balloon going fuzzzzzz with a sudden unexpected puncture. I gather my wits and then burst out laughing, almost falling off my chair.

Minnie however is expecting applause and fulsome praise for her first piece of literary work on which she has certainly put in a lot of effort and of which she obviously is very proud – hence she is as much bewildered as offended by my unexpected reaction, which she finds pretty weird and rather unbecoming because she has in the past found me unfailingly prompt and effusive in my appreciation of her efforts and achievements.

I must have laughed for quite some time because when I eventually stop, I find her on the verge of tears. I quickly realize my mistake, draw her closer, gave her a big hug and say “Shona (dear) – you have written a wonderful poem, I love it and you should be proud of yourself”. Minnie’s face breaks into a bright smile.

Then when I ask her in mock anguish why she thought her Dad was bad, quick comes the indignant reply: “But Babi – you are the best Dad ever! This is not about YOU really, it is about rhyme, you see R-H-Y-M-E, don’t you get it?!”

All for the six year old Poet-Daughter! Who would deny that Dad, Bad, Sad, Mad, Glad rhymed perfectly well?

Holding her tight, I say “Thank you Shona for the clarification …”.

Not that I needed any.