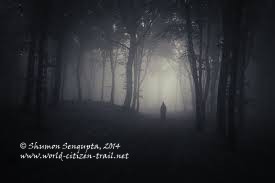 I like ghosts – I mean the very idea of it. And I would love to meet one (or more) if possible.

I go out every (almost) morning at five, for a brisk long walk in and around Spur Loop – the area I live in. High up along the meandering deserted streets in the hills, it is pitch dark and silent at that time.

When I go for my early morning walks, the sky is generally clear and sparkling, studded with distant stars and planets. And the moon is up there, with its shimmering silvery reflection on the still North Atlantic Ocean. At a distance, I can also often see cargo ships in sail, over the Freetown Estuary. Cool winds blow from time to time, trees whisper and sway in silhouette, against the star studded night sky. Apart from the sound of an occasional night bird and a barking or howling dog, I can only hear the sounds of my energetic footsteps and rapid breathing, as I negotiate the slopes. The path is dark and deserted.

I guess it is also an ideal time, apart from walking, for ghosts and spirits of all kinds to make their appearance, particularly to one who is keen to meet them.

Now dear reader, please don’t mistake me – I don’t go out early every morning in the darkness, hunting for ghosts. The walks I take are a part of my fitness regime. But truth to tell, I am also on the lookout for ghosts at the same time, should they chose to do me a favour and present themselves to me.

You should know that Sierra Leoneans are very good looking, with beautiful polished ebony skin tones. And because of their dark skin tones, you really can’t make them out very clearly at night. So, in the dark, when someone goes past you, often you can only make out the person by his / her cloths. So you can easily mistake a real man / woman for an apparition and vice versa.

In any case, that early in the morning, there are few other people on the streets and often I don’t meet anyone during the first half of my walk, when it is really very dark.

But once in a while I do come across some people. And on some of these occasions, my encounters have been … well spine chilling to be precise.

One morning, as I was walking up the slope by the Chinese Embassy, in the darkness, I could faintly make out two people around forty feet in front of me, coming towards me from the opposite direction. And then straining my eyes, I could make out that it was a man and a woman, the woman seemed to be holding the man’s upper arm and providing support as they walked. In the darkness, I could see the outline of the two bodies from time to time. When the couple was about two meters from me, almost next to me, I must have looked away for a second or so. When I looked again, they were not there anymore. And I had not heard their footsteps either. Startled, I turned around to see if we had crossed already – the road was empty, with not another soul around. I looked at both directions once again; slightly puzzled, I ran back in the direction the couple was headed to, wondering where they had gone. I couldn’t find anyone. Using my mobile torch, I even glanced along the bushes by the road to see if they had sat down by the road to rest. No one was around – simply no one. They had vanished into thin air! It was then that I froze on my tracks and felt a chill up my spine, sending my body into a cold sweat.

The other morning, as I was negotiating the steep climb around the Irish embassy along the dark tree lined Loop road, I thought I heard a strange metallic jingling sound come from around the bend at the top. As I walked on, the sound only seemed to get more distinct. It wasn’t a sound I was familiar with and it appeared as if some heavy chains were being dragged slowly, along with soft clangs of metal. And mingled with the sound of dragging and clashing metal, I could hear some muffled human voices. I wondered if the Irish Embassy was building something within their compound and using heavy machinery. But then it was around half past five in the morning and pitch dark. And in Freetown, construction work of any kind is always done in day light – I therefore thought the sounds very unusual.

And as I walked up, at a distance I could faintly see 4-5 men in a single file, one behind the other going up the bend around the top. It felt as if they were at the tail end of a long row of men linked to one another, slowly and hesitantly making their way up. Curious to see what they were up to at this hour, I broke into a jog. And as I reached around the bend at the top, I looked ahead and the street was totally empty! The street ahead was deserted and silent. Again I looked all around, ahead and behind, there was not a single soul around other than the security guard dozing in front of the embassy gate. I was completely baffled, for I was sure that I had heard the metallic sounds and seen at least 4 men in a row go up the hill, just a few seconds back.

I quickly dismissed the incidence as a figment of my imagination. I had recently read Alex Hailey’s book ‘Roots’ for the second time and vivid images of East African slavery described in the book were quite fresh in my mind.

And then something extraordinary happened this morning, which made me want to write down my experience and share it with my dear readers.

This morning, as I was walking along the curve in the road overlooking the ocean, at a slight distance I could see the faint outline of a man in a single crutch limping on slowly. Even from the distance and in the darkness, it appeared to me that the man was in pain and in great difficulty. You often can make this out from a person’s posture and body movement. I then wondered what would a man who has got a walking difficulty, be doing so early in the morning, walking all by himself along the deserted road. I kept walking and since my speed was much faster than the limping man with a crutch, I was catching up rapidly. And then I was close enough to clearly hear the man’s footsteps, the sound of his crutch, heavy – rather hoarse breathing, a faint groan and a strange unpleasant smell – of sweat, blood and flesh. It appeared that he was making an incredible physical effort to walk.

Feeling concerned, I hastened my steps to catch up with the man. I was wondering I there was anything I could do to help him get to his destination. Momentarily lost in my thought, I would have probably looked away for a second of so, but when I looked again, the man was gone! By then, he should have been just a few meters ahead of me and yet he was no were to be seen. The sound of his footsteps, the hoarse breathing, the faint groan – all of which I could hear distinctly till a moment back, too had dissipated into thin air! There was pin-drop silence, but for the distant and eerie howl of a dog. I looked all around – the man with the crutch was nowhere to be found. But the unpleasant smell seemed to linger in the air around me.

I must confess, this time I was really scared. But unlike the last time, I did not freeze on my tracks; I just ran for my life from that place and kept running till I was panting, my lungs were bursting and I simply could run no more. And by then, the very first faint streaks of dawn had begun to appear in the sky. I felt relieved and reassured.

When I come to think of it, I now feel incredibly stupid that I was so scared.

But what I experienced was so vivid and so real! And mind you, all this was early in the morning, when my mind is at its alert best. And I don’t drink alcohol, I don’t smoke and I don’t take pot, to have been under any unfavourable influence.

Now, when I come to think of it, truly if there are ghosts and spirits, Freetown is sure to have a good share of them. After all, in addition to a dark history of slavery, Sierra Leone has seen one of the worst civil wars in recent past. Thousands were tortured, maimed, raped, mutilated and killed in the decade long brutal conflict. So I recon, there would be many a tormented spirit hovering around.

Do you think some of these spirits are revealing themselves to me in a pattern of some kind, prompting me to unravel, reconstruct and then connect their unspoken stories into a broader narrative? Now how I wish that was truly the case, for that would be a fascinating novel in the making, inspired by ghosts, wouldn’t it?

It is interesting how a particular point in space and time can conspire with the fertile human imagination and play strange tricks even on a rational, sound and fairly intelligent mind. It can conjure the most incredibly impossible things and present as reality.

But then was it really my imagination? Or am I stubbornly denying the existence of ghosts, even when I am actually seeing them? 🙂 🙂 🙂 🙂

Dear reader, what do you think? 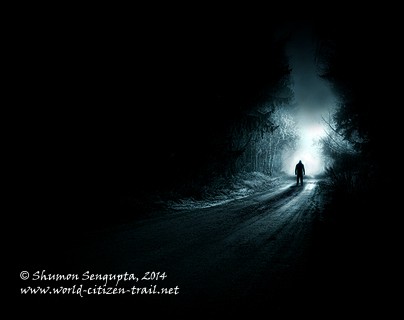 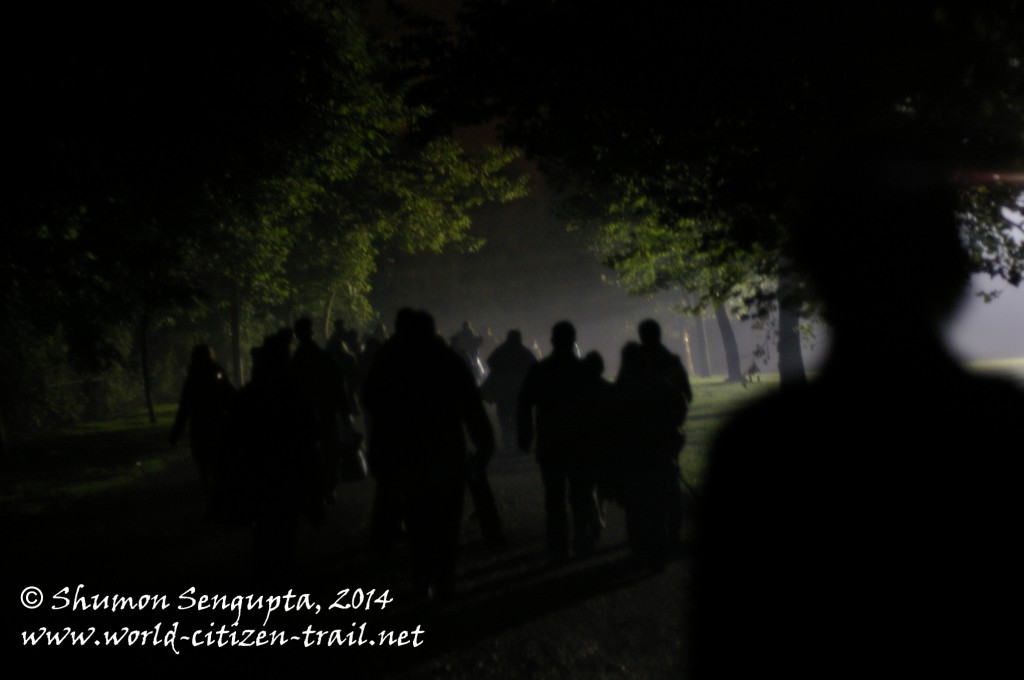 PS: This probably is the most juvenile piece I have written so far. It is my first piece on mumbo-jumbo. My readers would therefore be well advised not to believe anything that I have written in this post  🙂 🙂 🙂 🙂 🙂 🙂