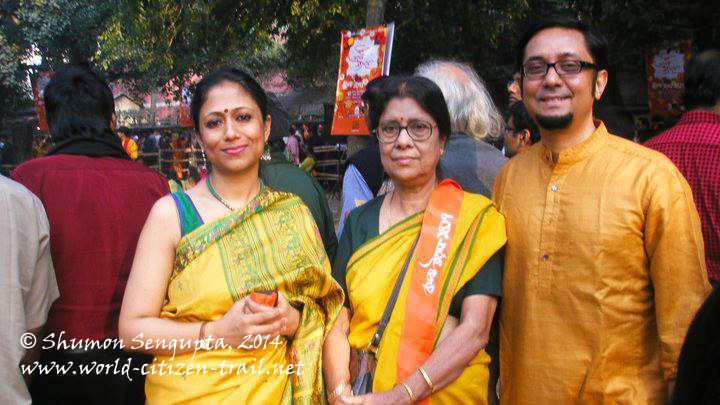 When I reflect on the long and eventful life of my mother, I feel humbled, I feel inspired, I feel sad, I feel happy and above all, I feel proud and blessed.

My mother was hugely talented, had an artistic and creative mind and a highly evolved and nuanced sense of aesthetics. At the same time, she did not have her head in the clouds – she was well grounded and practical. 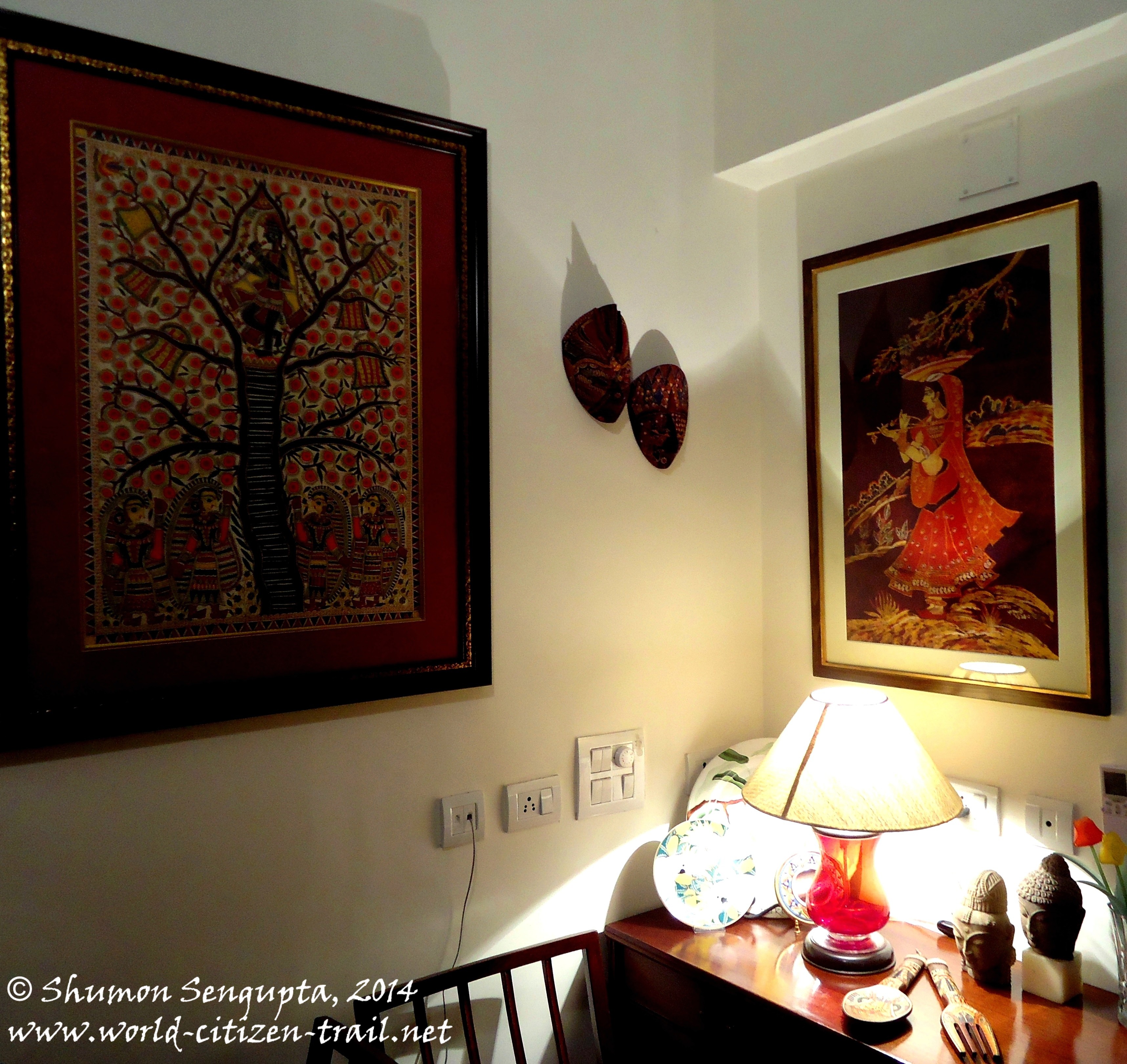 The village toy seller: One of few surviving batiks (right hand side) done by my mother… in our living room in Kolkata…

At 80 she had a stable singing voice. She excelled in the art of Batik, as she did in knitting, embroidery and tailoring. At the height of her artistic productivity, she had an international clientele for her Batik works.  And she was generous in teaching her art to anyone who approached her and was willing to learn from her. I learnt to appreciate fine art from my mother. 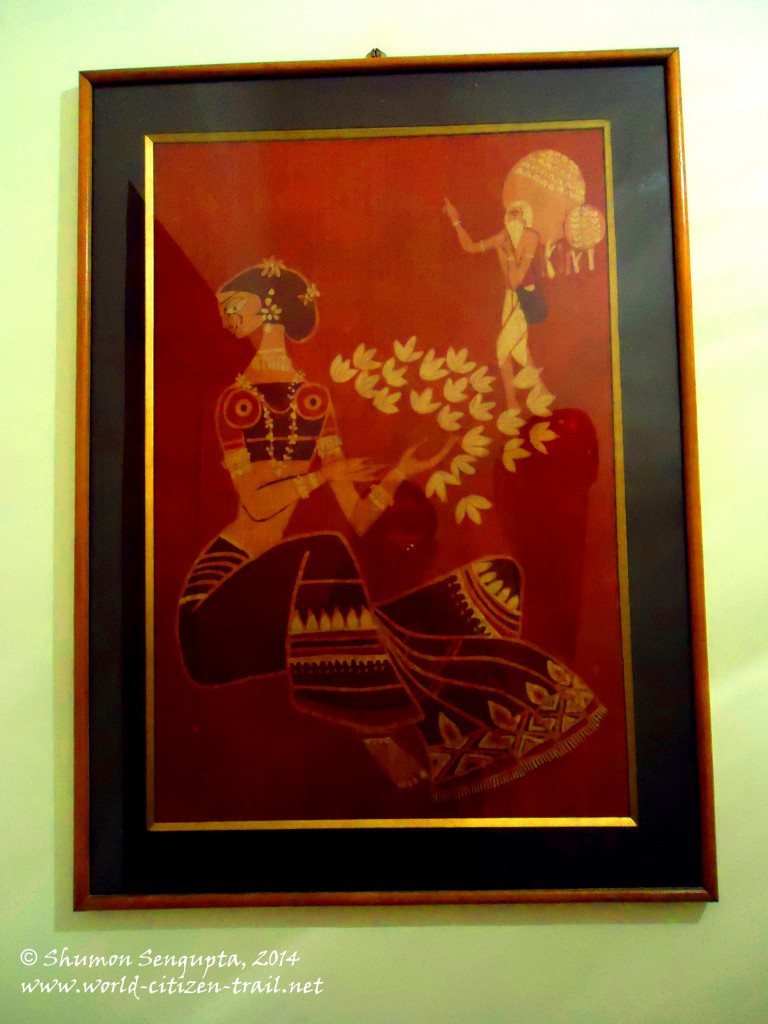 The curse of Durvasa – a Batik by my mother.

At the same time, my mother had an insatiable desire to learn and did not stop learning till the end. She was eager to learn from anyone, anytime. Much earlier in life, she had trained in vocal music (Rabindra Sangeet) under the legendary Kanika Bandyopadhyay in Shantiniketan. And then at the age of 70, she had enrolled for learning music from Sangeet Bhavan in Shantiniketan and also took private lessons from Rabindra Sangeet exponent, Smt. Swastika Mukhopadhyay of Shantiniketan.

My mother ran a small NGO, largely with her own resources. She taught and periodically fed about 40 deprived children at her home in Shantiniketan. She truly believed in ‘noblesse oblige’ – she felt that she had an obligation towards those who were not as privileged as she was. And I see my mother’s influence in my own choice of career. It is a different thing that I get paid for my work, my mother wasn’t; in her case, it was altruism in its true sense.

My mother had a healing touch and could be depended upon to rush to any family member’s bedside during an illness. She was greatly appreciated in the extended family for her selfless service in this regard.

My mother had her own world view, independent of any zeitgeist. Moreover, she had a wonderful sense of style, independent of any current trend in fashion. She was always impeccably dressed and had great sartorial taste. She had this amazing capacity to carry off the simplest of cotton sarees with great panache and elegance. She disliked loudness in attire and any form of excess, ostentation and exhibition in both attire and in material possession. And she was never impressed by wealth – she was largely indifferent to its possession by others.

By all means, my mother was a very difficult person. She was very head strong and stubborn, did not suffer fools easily and gave back as good as she got, more often than not – more. She carried her grudges and in my view, she was often unreasonable and uncompromising. In the process, she was at times not fair to others and by extension, didn’t do justice to herself. She often found it difficult to get along with people and suffered greatly for this.

But she stuck to her convictions – on what she thought was right – such was the strength of her character. 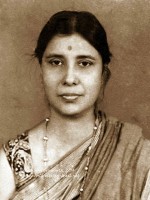 My mother simply knew no fear and had the nerves of sheer steel. In this respect, she could rival the strongest of men around her. She was supremely confident about herself and was determined to see things to their end even against all odds. She faced the downsides and setbacks of her life with unfaltering and unshaken grit, confidence, dignity, fortitude and faith.  I wish I had inherited some of this from her.

My mother was an amazing cook. She had inherited many family culinary secrets and had expanded her culinary repertoire further, through her own ingenuity and sense of innovation and serendipity. She could conjure magic with the simplest of ingredients and in the shortest period of time.  And she could, almost single handed, cook for fifty people.

My mother refused to receive charity from anyone and she settled her dues to the last penny, promptly and diligently. She would always remember and openly acknowledge a favor or an act of kindness that came her way. And as much as it was possible, she would return the favor in her own way. 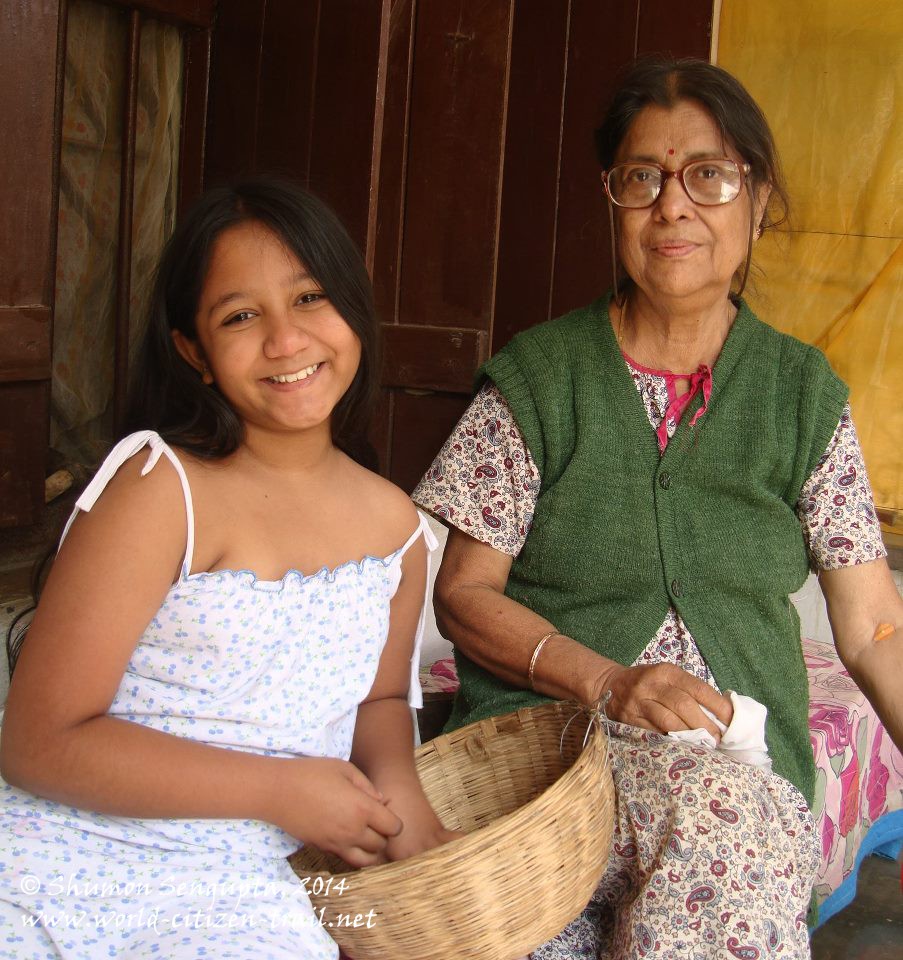 With my daughter, Madhura, in the little veranda in Shantiniketan… they had just picked up some fruits from the garden. My mother was at that time recovering from an earlier illness.

My mother’s personal integrity with respect to financial matters was of the highest order. She abhorred any form of moral depravation and had zero tolerance to corruption in any form, particularly bribery and graft that are so common in the Indian subcontinent. If there was one thing for which my mother stood tall, it was her financial probity and I greatly respected and admired her for this. My mother’s unfaltering sense of financial probity has strongly influenced my own public life with respect to my fiduciary responsibilities, dealing with public funds in my work. 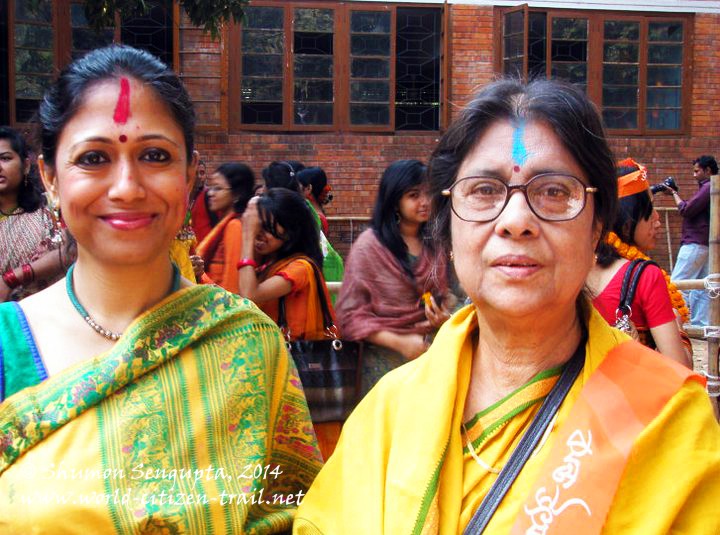 With Ananya (my wife) at the Spring Festival in Dhaka.

My mother was a very proud woman and was fiercely independent. After my siblings and I set off on our own, she separated from my father and lived all by herself in a little cottage in Shantiniketan. She lived her life on her own terms and didn’t want to be accountable to anyone but herself.

My mother refused to be a burden on her children till the last day of her life. Unaware of the actual nature of her serious medical condition, she suffered a spate of serious illnesses for over a year, all by herself in Shantiniketan. She did not inform us of the details. It was only when she was no longer able to bear her illness, in the state of extreme physical agony that she reached out to my elder brother in Delhi for treatment. Just as my elder brother and sister in law had taken in our father in his old age, they took our mother in, when the need arose. Our mother however had just a few days left. In Delhi, she was diagnosed with terminal lung cancer that had spread to the spinal cord. By then, it was too late for any treatment and she was sent home from the hospital; she lived merely for three weeks in Delhi before she passed away.

My mother not only provided adequately for her own treatment and end of life care, but also ensured that all other costs (including her transportation) were fully covered from her own savings. And to top it all, she left behind a significant amount of money in legacy.

With cancer raging through her body, the last three weeks of my mother’s life were agonizing; yet she bore it stoically – almost silently. Only those by her bedside, including my elder brother, my sister in law, Ananya, Minnie, our cousin, Abu Da, his wife and I had an inkling of her suffering.

Her agony was two folds – firstly the intense and unrelenting physical pain and secondly the feeling of total helplessness. Accustomed to being in total control, my mother found it extremely difficult to come to terms with the fact that she was finally losing it. Till two days before she died, braving intense pain, she insisted on getting up and attending to her toilet on her own. She had an immense tolerance to physical pain – a thing I wish I had inherited from her.

Towards the end, she was under palliative care provided by CanSupport (www.can support.org). She passed away peacefully under the influence of oral Morphine and transdermal Fentanyl, in the early hours of 19th July. I was by her bedside and saw her life slip by. 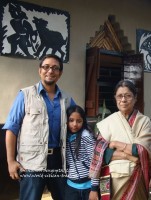 It gives me some happiness that I was by her side, almost all the time, in the last week of her life. I was able to sing to her, pray with her, talk to her, hold her hand, walk down the memory lane and relive many wonderful memories together. Towards the end, she had stopped speaking, but her hearing and comprehension was intact. She would often smile faintly, raise her eyebrows, nod and even open her eyes for a moment, as I recalled events from the past and rekindled old memories.  I think she found some solace and comfort in my company. 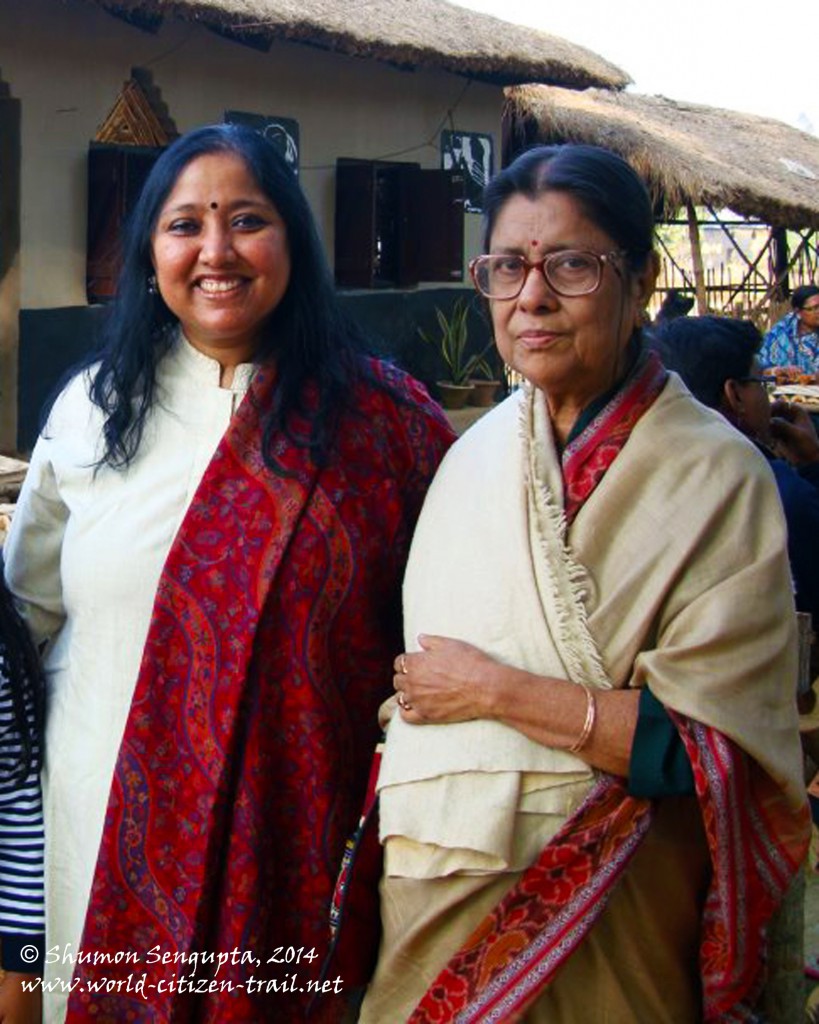 With Smita, one of my closest friends..

My mother personally knew well and loved my close friends, many of whom visited or called her during her last days. It gave her a lot of happiness. She took pride in the small circle of long time friends I had; she knew I was always in good company and was happy at my good fortune with respect to friends.

At 81, my mother had lived a full life. She lived with her head held high and died in peace. In the last week of her life, sitting by her bedside, I learnt what it is to endure pain silently and die with dignity, against all odds.

By all means, hers was a life worth remembering and celebrating. I do miss my mother, but I shall not grieve any more. It shall only be a celebration henceforth. 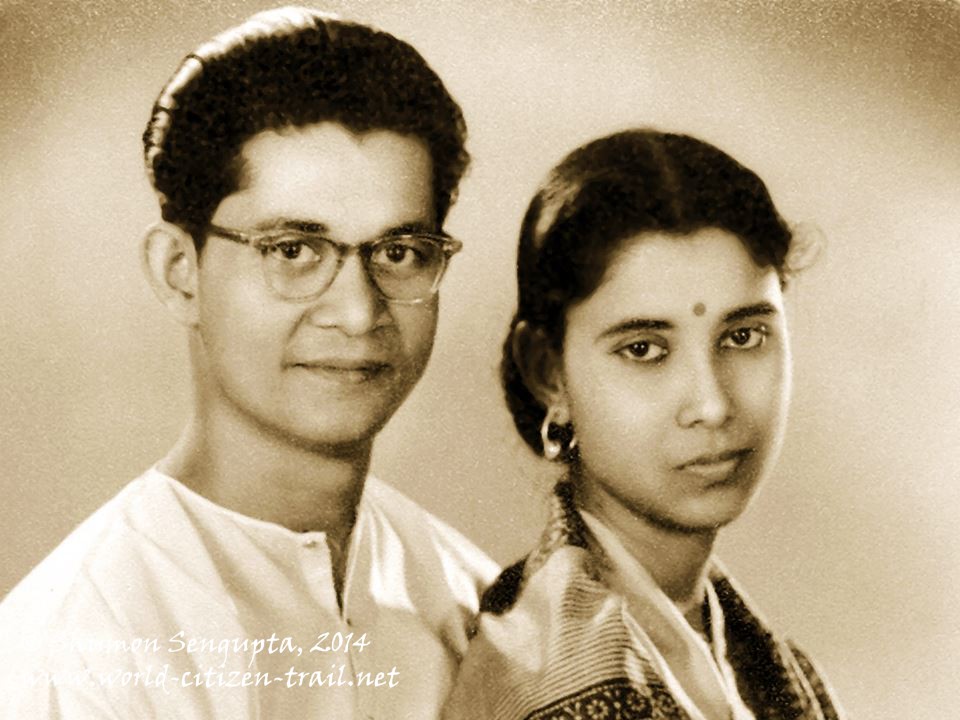 Mum and Dad, soon after they were married. Photograph: Zephyr Studio, Ranchi