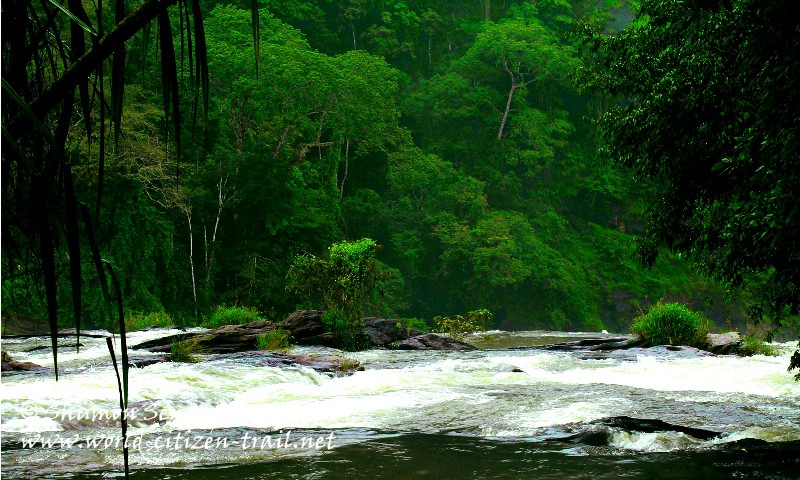 At the foot of your secluded waterfall
I knew not, when
This earthen pitcher of mine brimmed and overflowed
–       Rabindranath Tagore (translated by Shumon Sengupta) 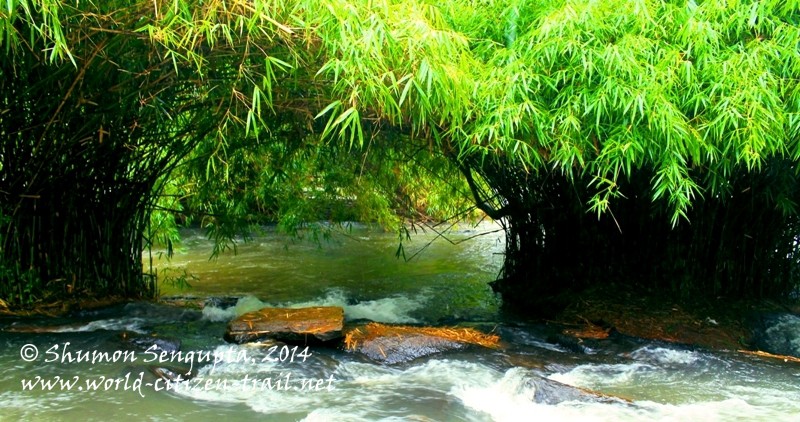 In my previous post, I had described our trip to the beautiful Athirapalli Waterfalls on the Chalakudi River in Thrissur district of Kerala. In this post, I take you on a journey to the nearby Vazhachal waterfalls – a journey that for us as much physical as metaphysical.

My wife (Nina), our 10 year old daughter (Minnie) and I were on a 15 day tour of Central and South Kerala. 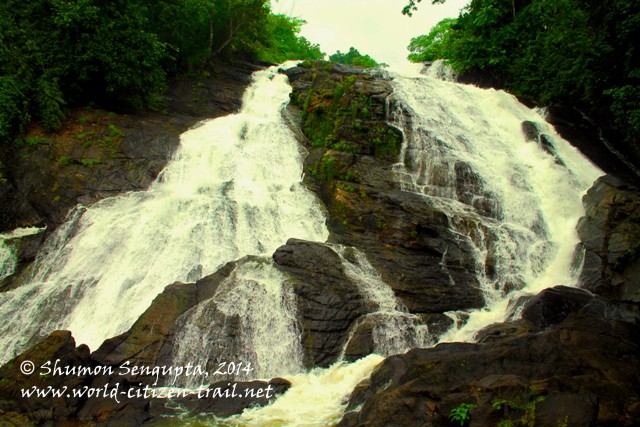 A small waterfalls by the road to Vazhachal 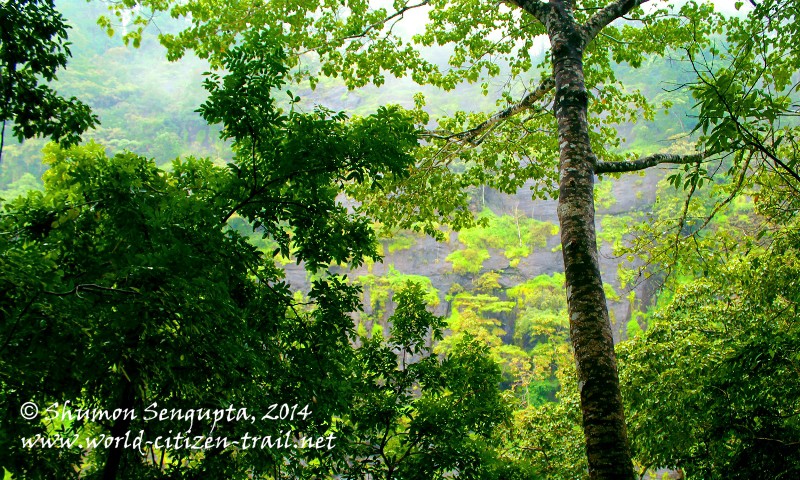 The picturesque Vazhachal waterfalls are located amidst the dense green Sholayar forest range of the Western Ghats (mountain range). This is an area where mountains, forests, streams, rivers, waterfalls and cascades are intertwined intimately into a unique, rich and diverse landscape. This area is also widely recognized as one of the important bio-diversity hot spots on earth.Located approximately 5 KM upstream from Athirapalli, it and it took us approximately 10 minutes to drive to Vazhachal from Athirapalli. The same entry ticket is valid for both the places.

At the entrance to area, the forest department has created a small medicinal garden and a park for children. I don’t particularly like the idea altering the vicinity of a natural marvel with too many artificial structures, more so because the forests of Vazahcal are dense and lush. But then I guess the park would be a fun place for kids to play in, amidst nature.

Unlike the Athirapalli, in which the waters plunge dramatically off a steep plateau, the waterfalls at Vazhachal follow a gradient, along a slope, in rapids and cascades. Fringed by densely forested hills, the gushing and gurgling waters flowing over a rugged bed of rocks and boulders look like streams of cold silver against sunlight. The lure of venturing into the cascade is indeed is very strong and there are security guards keeping a constant vigil to prevent visitors from taking any risk. Almost the entire length of the cascade is barricaded because it can get very risky, particularly in the monsoon, when water is suddenly released from the dam upstream and currents become very strong. However one can safely get very close to the cascade and even into it, at a few designated places slightly upstream. 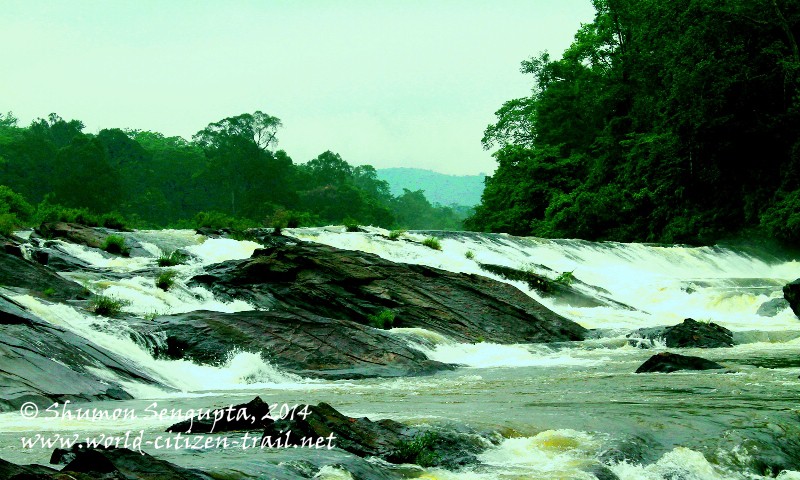 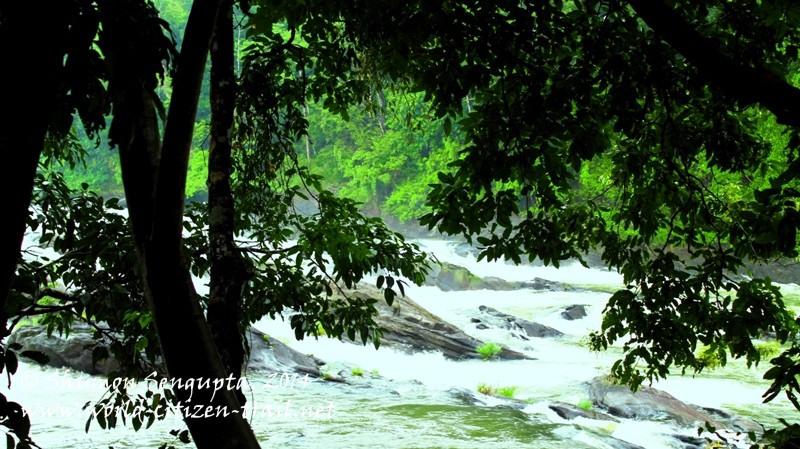 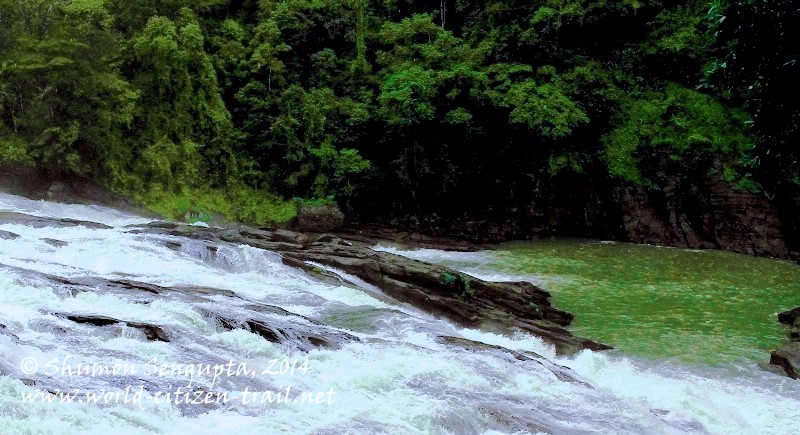 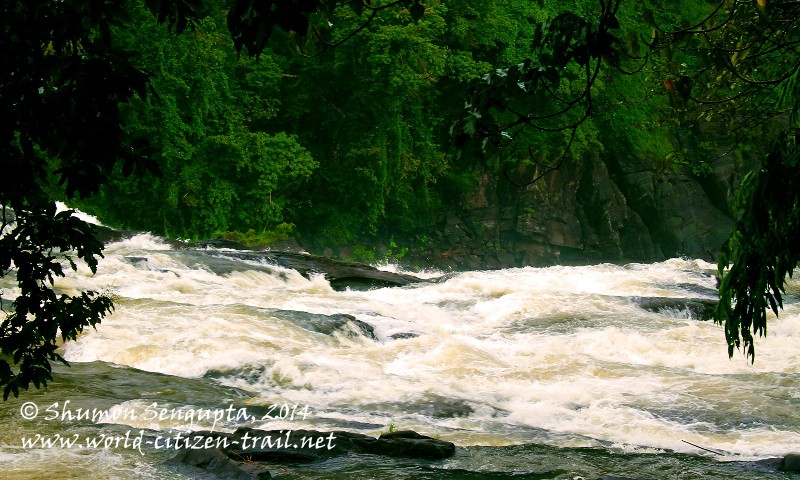 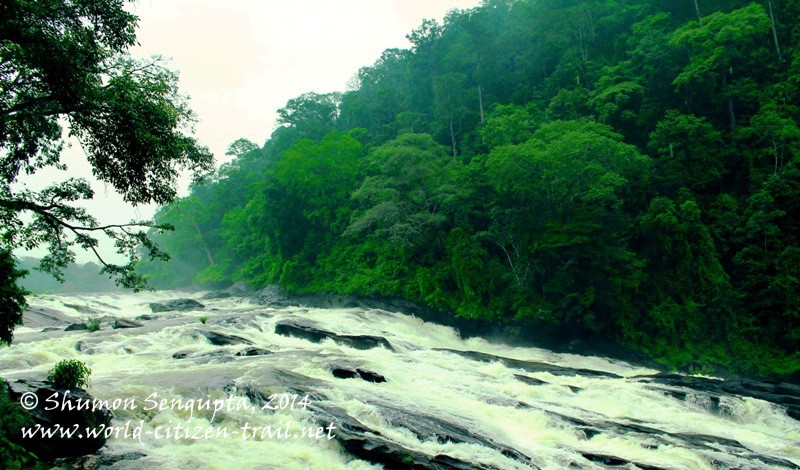 Given the peace and tranquillity of the place and ample places to sit, one can spend the whole day there, simply relaxing under the trees by the rapids, reading a book or simply doing nothing. As mentioned earlier, there are a few safe places, where one can venture into the water as long as one remains within the limits. Minnie, went into the water flowing over the rock bed in a shallow area near the bank and got drenched.  She was however under my close supervision and I ensured first that where she was going was totally safe. 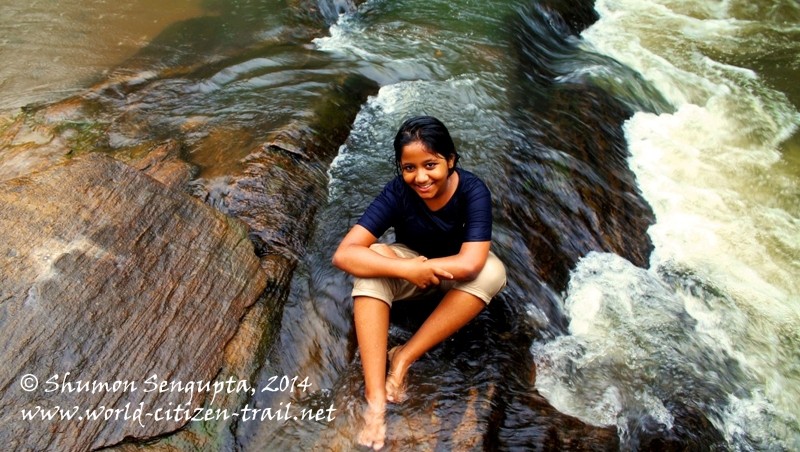 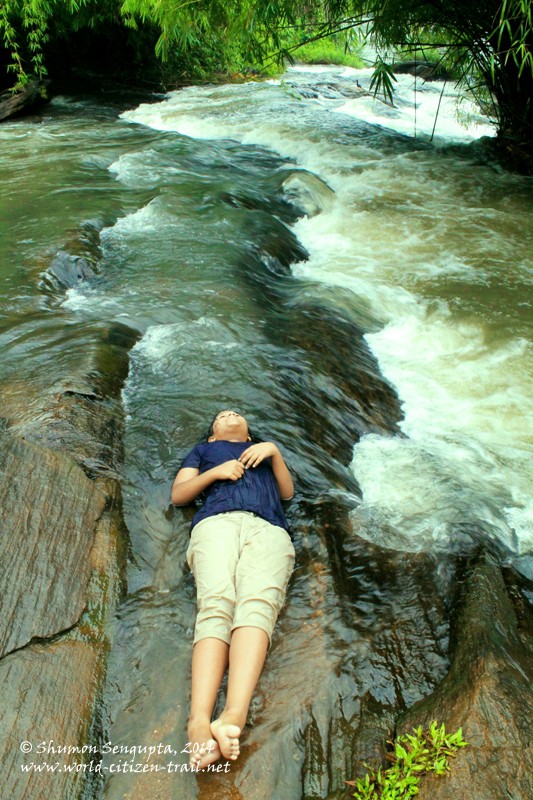 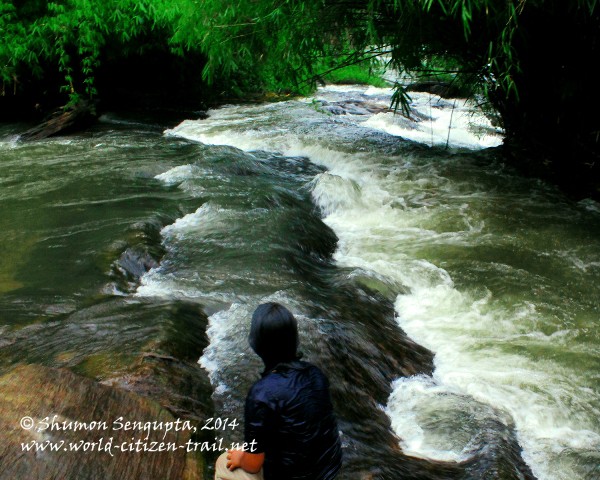 It was raining when we went and we loved it. The monsoon of Kerala has a magic of its own. Also it was late in the afternoon, a couple of hours from closure; hence there were very few visitors apart from us and we had the place almost entirely to ourselves. We walked along the cascade leisurely, admiring the beauty of the place, soaking in the atmosphere, getting wet in the rain, taking many photographs. 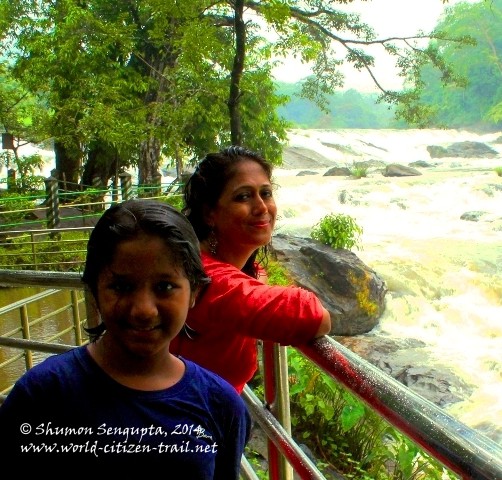 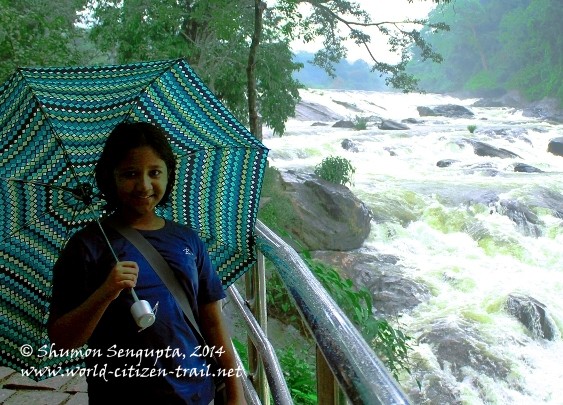 And as we walked along, we paused at different places and admired the view. Minnie is a wonderful travel companion and is always pointing out interesting things during our travels. She drew my attention to some monkeys at the other side of the cascade. The monkeys were doing exactly what was expected of them – being monkeys. 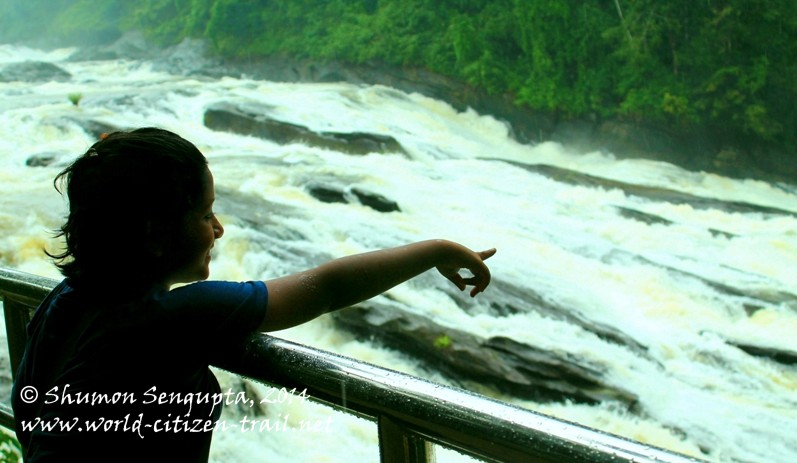 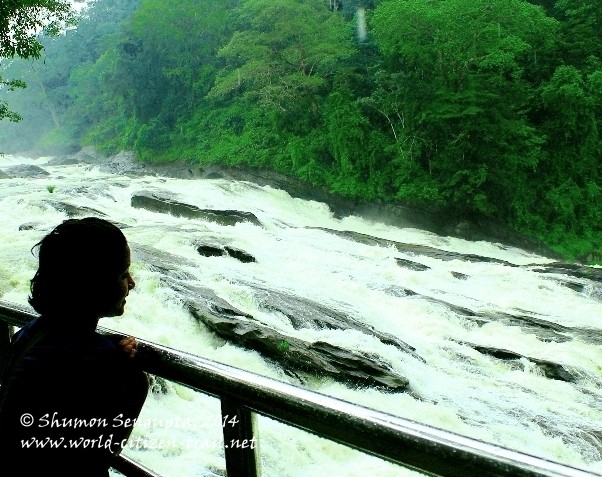 In the course of our leisurely stroll along the cascade, we came across a section that had a series of rapids and patches of dense clusters of lush green bamboos. Around these little islands of bamboo clumps, waters rushed and cascaded in wild frenzy. It was an incredibly beautiful sight. At one place, two clusters of bamboos formed a beautiful natural arch under which water flowed furiously. Seen from an angle it felt like water gushing under a tunnel made of Bamboos. 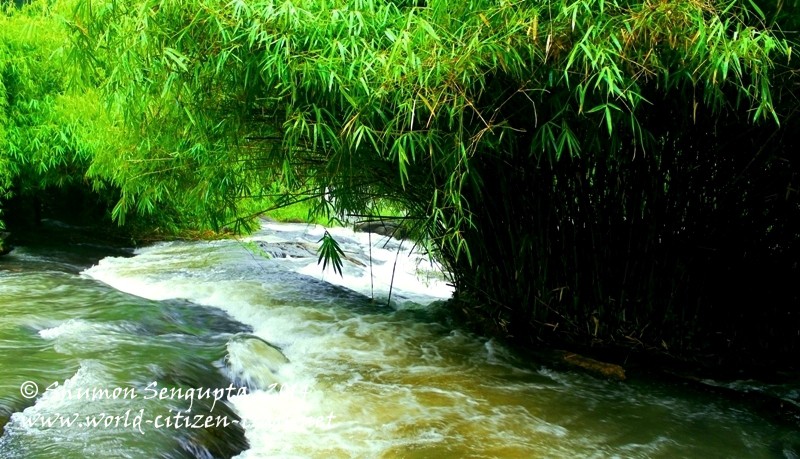 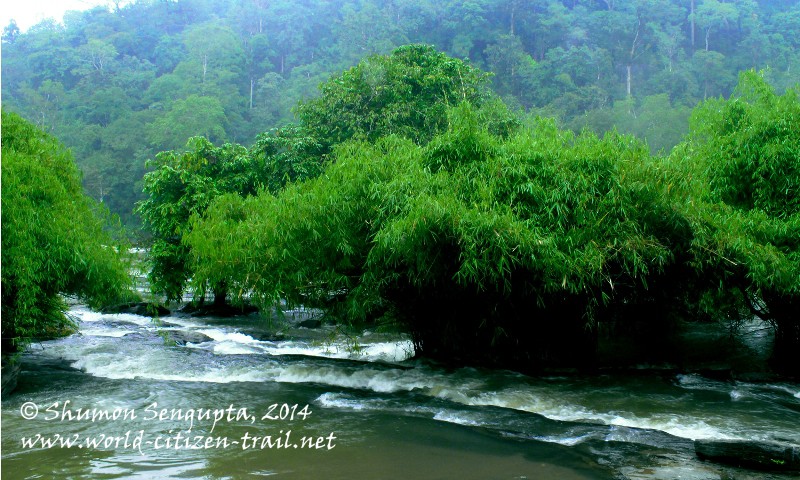 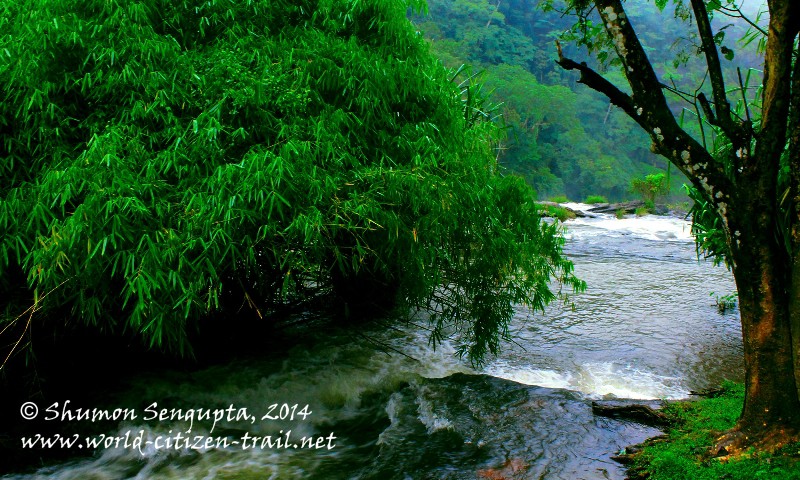 We stopped at this unusually beautiful and secluded spot for some time and I just can’t describe in words how magical and profoundly peaceful the time and place was. Even Minnie seemed to have come under is its spell and we fell into total silence.

We were just the three of us, wrapped in sheer beauty, with music all around – of gurgling and rushing water, of rustle of bamboos, of the monsoon winds blowing through the trees, of the swaying and murmuring of leaves and branches, of falling rain and of the occasional call of birds and monkeys. 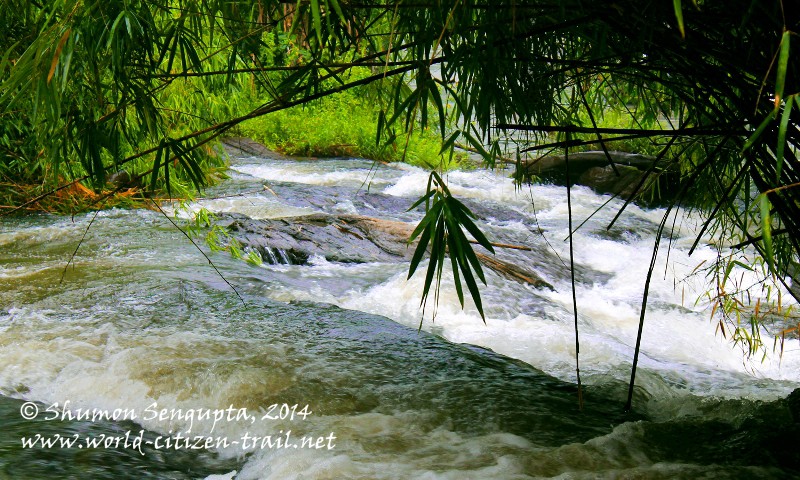 In the seclusion by your waterfall
I knew not, when
This earthen pitcher of mine brimmed and overflowed

The sun sets behind the mountains,
Swans fly away into distant skies
Absent minded, I sit silently by the gurgling waters
My ears tuned to its tender, plaintive music

During the day, I searched far and wide to meet my needs
Now I care no more, if my needs are met or not
For at day’s end, at the end of my search
Here have I arrived, beyond my needs

At the foot of your secluded waterfall
I knew not, when
This earthen pitcher of mine brimmed and overflowed

The sun had gone beyond the hills, day’s end was approaching and it felt as if time had come to a standstill. We were totally lost in ourselves and to the moment; the world beyond our immediate existence had dissolved and all worldly worries and cares sublimated; there was nothing but paramanandam – sheer beauty, benevolence and joy.

A security guard emerged from somewhere and gently reminded us that the place was about the close and we must begin to make our exit. 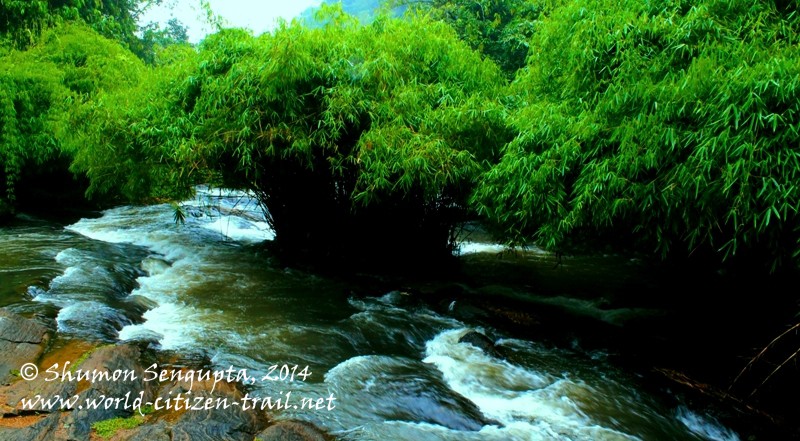 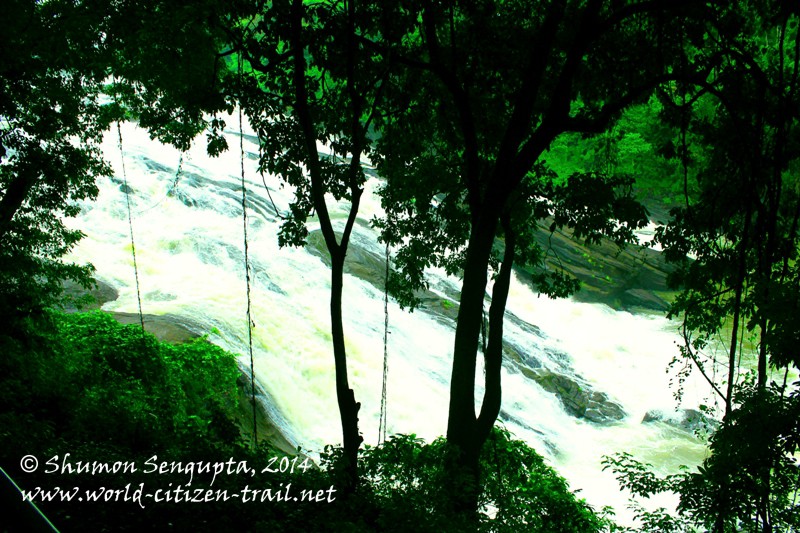